This site doesn't support Internet Explorer. Please use a modern browser like Chrome, Firefox or Edge.

Macular Edema occurs when excess extracellular fluid accumulates in the central part of the retina.

The swelling can cause visual distortion and loss of visual acuity.

Conventional treatments can include injection of steroids directly into the eye which increases risks of glaucoma, cataracts and infection...

With our Biofield Analysis™ biocommunication process, we find that the body's healing needs are more complex than just trying to force one physiological action, or suppress another...

Here are some recent real-world case reports as an illustration, showing how we are able to identify and support Accelerated Self Healing™ on multiple active causal layers of pathophysiology: 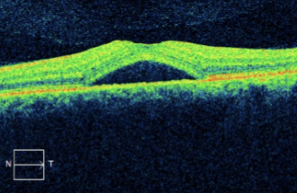 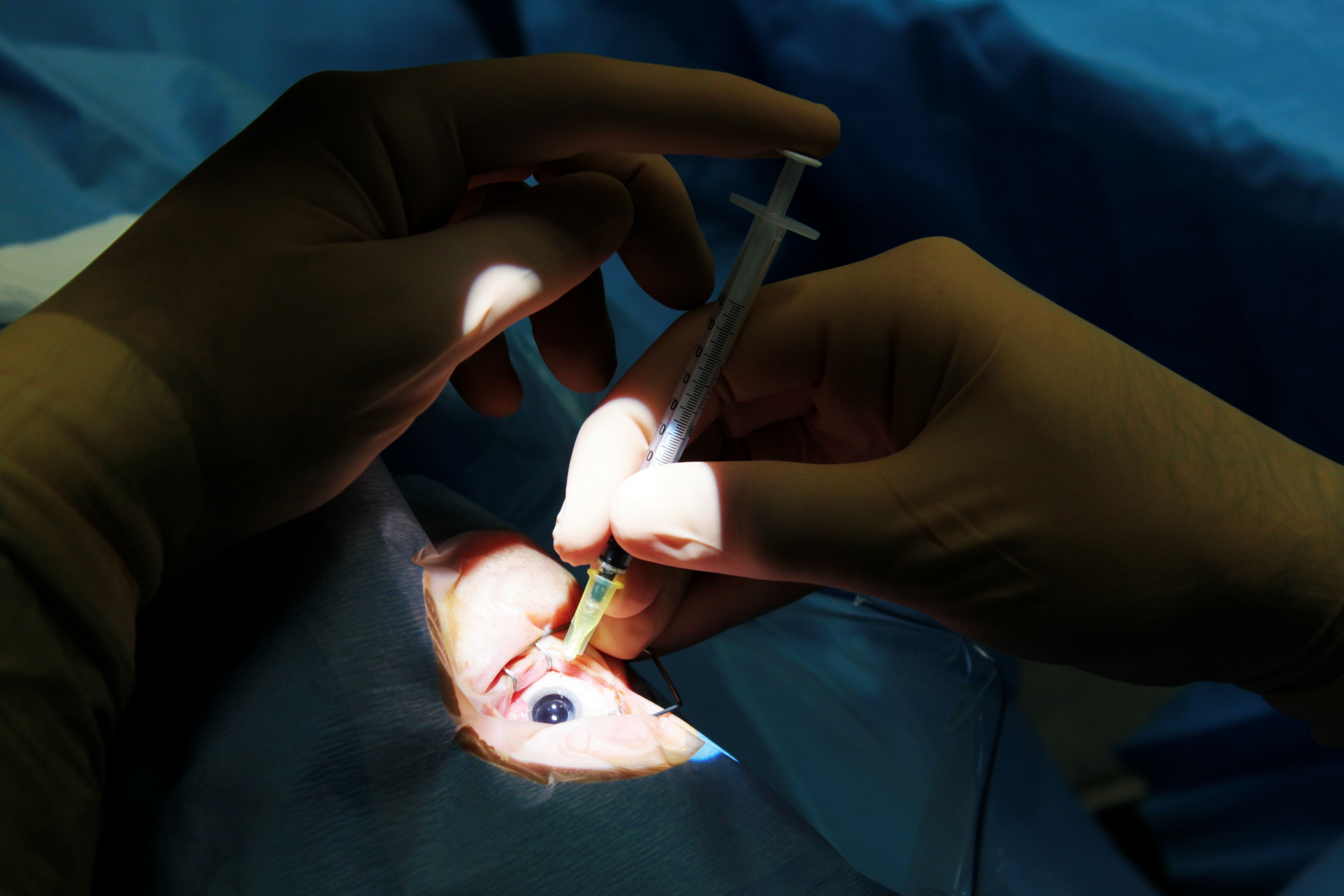 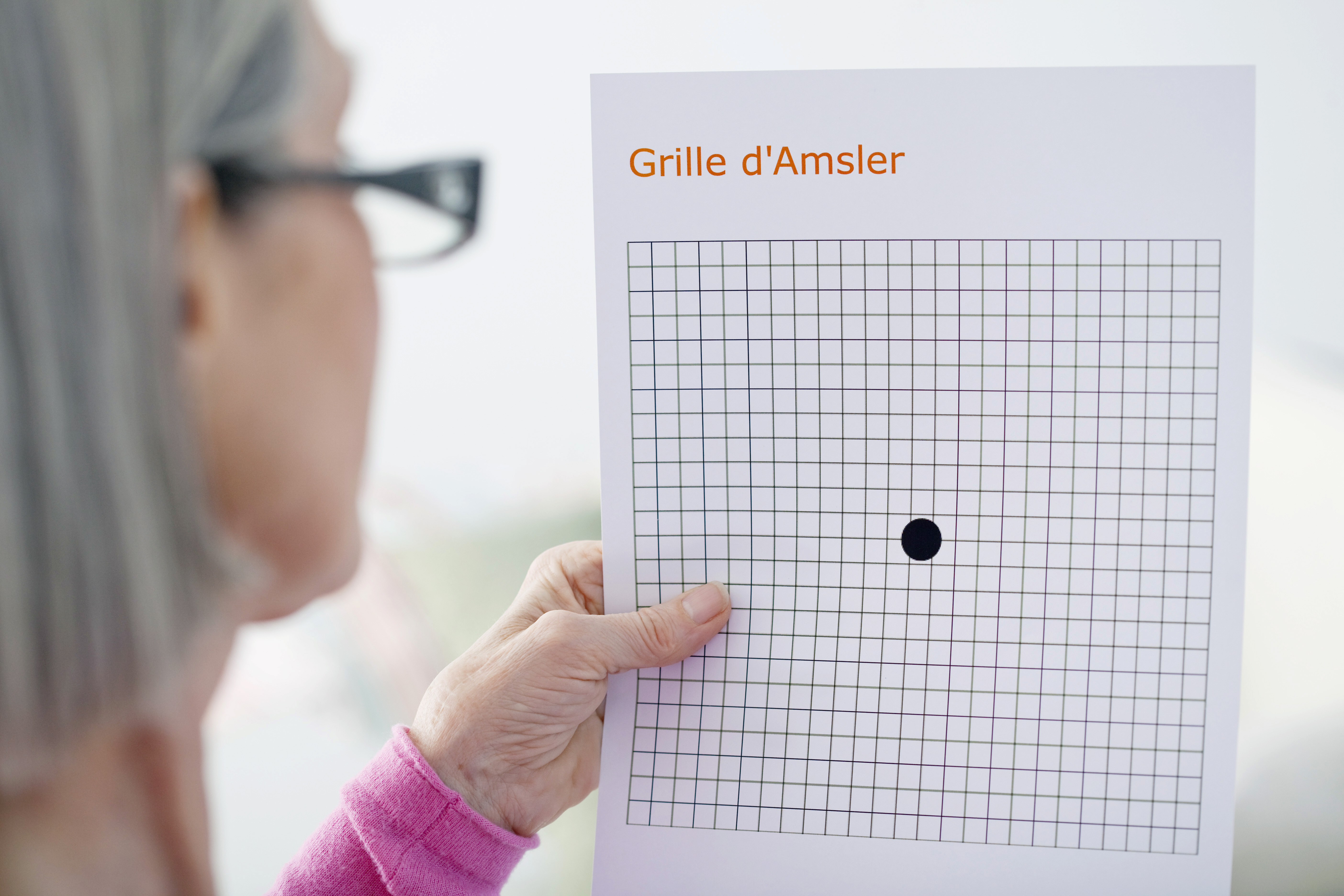 The client has a long history of diabetes and macular edema with steroid injections in both eyes every 2 months to control the edema.

The most recent eye exam including OCT imaging and injections were 2 months prior to the initial Biofield Analysis™. (1/23/22)

Following are the results of the initial Biofield Analysis™:

The primary terrain the body is focused on healing is Phase 4 (which is cleansing terrain) in the Kidneys.

The kidneys are the high-pressure filter that removes excess fluid, toxins, and acidity from the blood.

The highest stress level is in the Spleen Meridian.

In Oriental Medicine, the spleen is understood to be involved in maintaining the proper shape of tissues, such as the macula.

The Spleen Meridian is balanced by Glucose Tolerance (3x/day).

This also balances secondary stress patterns affecting the Phase 4 terrain and the Pancreas as a whole, which is primarily an exocrine (digestive) organ.

The Pancreas is considered the most sensitive organ, even more so than the adrenals.

The Spleen and the Pancreas are both part of the yin aspect of the Earth Element in Oriental Medicine.

The Earth Element is associated with the consciousness function of thinking, as is the Macula, which the work of Dr. Jerry Tennant has found to be connected to the Stomach Meridian, which is the yang aspect of the Earth Element.

Once the first causal layer is balanced, the second layer can be identified.

The source of stress and the balancing remedy both identify with ED4 Nerve Driver, which is an Infoceutical (epigenetic information medicine) produced by NES based in England.

This remedy also balanced secondary stress patterns on this layer: the Kidney, the Kidney Meridian, Mercury, and the Crystalline Lens.

Mercury, in fact was a primary medicine used to treat Syphilis.

In this case, we note that Mercury is fat soluble, and so affects nerves including the retina since nerve tissue is high in fatty acids.

Mercury has a very irritating and destructive effect on the vasculature and on the highly vascular kidneys.

Mercury binds to sulfur which is found in amino acids, and the lens of the eye is the densest protein in the body, which is why it retains Mercury longer than any other tissue in the body.

On the third causal layer, the endocrine portion of the Pancreas is affecting the Aqueous Humor and both are balanced with Macular Wellness Astaxanthin.

This remedy also balances the related secondary stress seen in the Ciliary Body which is the structure that produces the aqueous fluid.

The Intraocular Pressures (IOPs) are currently very high since implanting a steroid releasing device in each eye.

Steroids can cause glaucoma, and due to the high pressures, the Ophthalmologist decided that steroid injection would not provide benefits at this time, and opted for followup in one month (3 months after the last injections).

On the fourth causal layer, Acid is affecting Eye Area.

Both are balanced by Immune Modulation, which boosts immunity while reducing counterproductive inflammation such as in allergy and auto-immune processes.

Acid is produced by metabolism, stress, and toxicity, including most pharmaceuticals other than steroids and NSAIDs.

Both are balanced with Sublingual 7 Keto which uses low dose physiological steroids that support restoration of the adrenal glands, while reducing the need for and the side effects of prescription steroids.

The Triple Warmer Meridian of Oriental Medicine is also termed the Endocrine Meridian in our Clinical Theory™ based on European Biological Medicine.

On the sixth causal layer, the Thymus is balanced by Lymph Support (2x/day).

Lymph Support helps lymph drainage, which is one of the primary outflow channels for fluid drainage from the eye.

The Thymus controls up-regulation of inflammation by the immune system in counterbalance to the Adrenal's anti-inflammatory control function.

In our Clinical Theory, the sentient, immortal Spirit Mineral™ body is made of about 12 condensates of transition minerals close to Palladium in the Periodic Table of the Elements.

Condensates are the fifth state of matter that were confirmed by research awarded the Nobel Prize in 2001.

These are theorized, based on the Moon Model of the Nucleus (of Prof. Moon of the Manhattan Project) to have a nuclear structure that approximates a dodecahedral shape, giving it fractal resonance with a fundamental resonance mode of the Planck units (of time, space and energy) which are the voxels (3D equivalent of pixels) that make up all creation.

The fractal nature of creation is illustrated by the fact that there are the same number of Planck units inside each proton as there are protons in the Hubble Sphere (the visible universe).

The resonance with Gold in this case is also of particular interest because Gold is an antidote for Mercury.

After one month on the recommended ASH™ program, the ophthalmological followup showed dramatically reduced Macular Edema, and steroid injections were not indicated.

The ocular pathology diagnosis in this case was Pigment Dispersion Syndrome with Chorioretinopathy and Macular Edema.

During the three month period between retinal follow-ups, we performed a remote Biofield Analysis three times, and initiated a one month program of Accelerated Self Healing after each evaluation.

Six Causal Layers were identified and balanced on November 13th. That means the source of stress on that layer was localized, and a remedy was identified that converted the associated stress response into a stable state of energetic coherence.

1. Liver organ stress was balanced with Liver Support, to be taken with dinner, since the liver is most active at night. In Oriental Medicine, the Liver is strongly linked to the Eye as part of the Wood Element. This causal layer also balanced secondary stresses in the Extraocular Muscles which are associated with fluid drainage from the eye via the vortex veins, ES2 Memory Imprinter associated with epigenetics of heart function, ES4 Triple Cavity associated with epigenetics of the endocrine system, Hypofunction in the Triple Warmer Meridian associated with endocrine function, Heart, Kidney & Lung Meridians, Scar Disturbance, Liver and Colon organ stresses, and Black Bands (chronic weak areas) in Liver & Kidney.

2. Mercury was balanced with Sulfur Synergy, which includes a broad spectrum of Sulfur bearing compounds. Mercury has a strong affinity for Sulfur, which is considered the most detoxifying mineral. This layer also balanced secondary stresses affecting the Kidneys, Phase 2 Terrain which localized to the Kidneys, a recent Irritation Field affecting the Heart Meridian, Heart Rhythm and the Dental area.

3. Infoceutical ED2 Heart Imprinter balanced with Heart Health. Also balanced on this layer were EI5 Lymph/Bladder which represents the epigenetic information of the Bladder Meridian, plus minerals Iodine and Potassium.

5. The Eye Area balanced with Neuroprotect taken two to three times a day.

Five Causal Layers were identified and balanced on December 14th:

1. Level 2 Lymph Stress balanced with Immune Intelligence. There was also a parasite Iso Nosode and a food sensitivity that balanced on this layer.

2. First Rescue Flower Essence/Homeopathic Complex psychoemotional stress pattern balanced with Celebration Angelic Essence in a base of Terrain Restore. Terrain Restore provides a redox signal to the gut mucosa that seals leaky gut, and has cascading effects that restore tight junctions in the kidney tubules, the blood-brain and blood-eye barriers as well as the entire endothelium of the vascular system, reducing systemic inflammation.

4. Kidney organ stress balanced with Glutathione Synergy taken twice a day. This layer also balanced Iodine, Vitamin C, Kidneys, Acidity, Mercury and Lead. When Mercury is eliminated through the kidneys, it produces a lot of irritation, while Glutathione escorts Mercury out more comfortably via the Liver.

5. Infoceutical ED 13 Immunity representing the epigentics of a healthy immune system balanced with the infoceutical itself. This identity of the stress pattern and the remedy is comparable to the concept of an isonosode in homeopathy, except that the information pattern is that of healthy function rather than a disease tissue or disease vector as in isopathy. A common example of isopathic treatment is immunization by inoculation with a pathogen. Infoceuticals work by stimulating the epigenetics of health. Several other Infoceutical patterns balanced on this layer: ED 2 Heart Imprinter, ED 5 Circulation, ED 13 Immunity, EI 11 Heavy Metal/Stomach, and ET 10 Liver.

Four Causal Layers were identified and balanced on January 21st:

1. Mercury balanced with Glutathione Synergy. Glutathione (GSH) is the primary intracellular detoxifier of Mercury, and two molecules of GSH safely escort a Mercury atom out of the body via the Liver, bypassing the more sensitive Kidneys. The most affected stress on this layer was the Kidneys. The most affected area is often related to symptoms even though it is not identified as the original source of the stress layer. This helps explain why treating symptoms doesn't always alter the underlying pathophysiological process. In this case, for example, simply treating symptoms related to the Kidneys without addressing their underlying Mercurial cause would not achieve the same degree of Accelerated Self Healing™. This layer secondarily balanced the Liver, Kidneys, the Tonsils and the Bile Ducts, as well as a Black Band (chronic weak area) affecting the Kidneys and a Black Band affecting the Liver.

4. ED 1 Source Driver, which relates to access to the source of energy for all cells in the body, balanced with Mu Upsilon photobiomodulation therapy. The remedy is perceptually a Blue Green color of light applied through the eyes using a band-pass filter in traditional Syntonic Optometry. It has a gentle parasympathetic stimulating effect as well as the balancing affect associated with Green light. It is interesting from a clinical perspective that first the epigenetics of the visual receptivity function was balanced on Layer 3, and here on the next deeper layer, that system needed stimulation with selected frequencies in the visible spectrum. The most affected stress pattern on this layer was EI 1 Neurosensory/Large Intestine which relates to the epigenetics of the Large Intestine Meridian and Neurosensory processes. EI 6 pH/Kidney related to the epigenetics of the Kidney Meridian was also balanced along with ES 13 Carbohydrate Metabolism, Food Sensitivity, and Acidity affecting the Liver.

In the third month, additional recommendations of Neuroprotect and Macular Wellness Zeaxanthin tested beneficial and were continued as support based on the clinical picture.

The macular edema was dramatically reduced at the three month OCT followup as shown in the Macular Cube data.

We look forward to being on your Wellness Team! 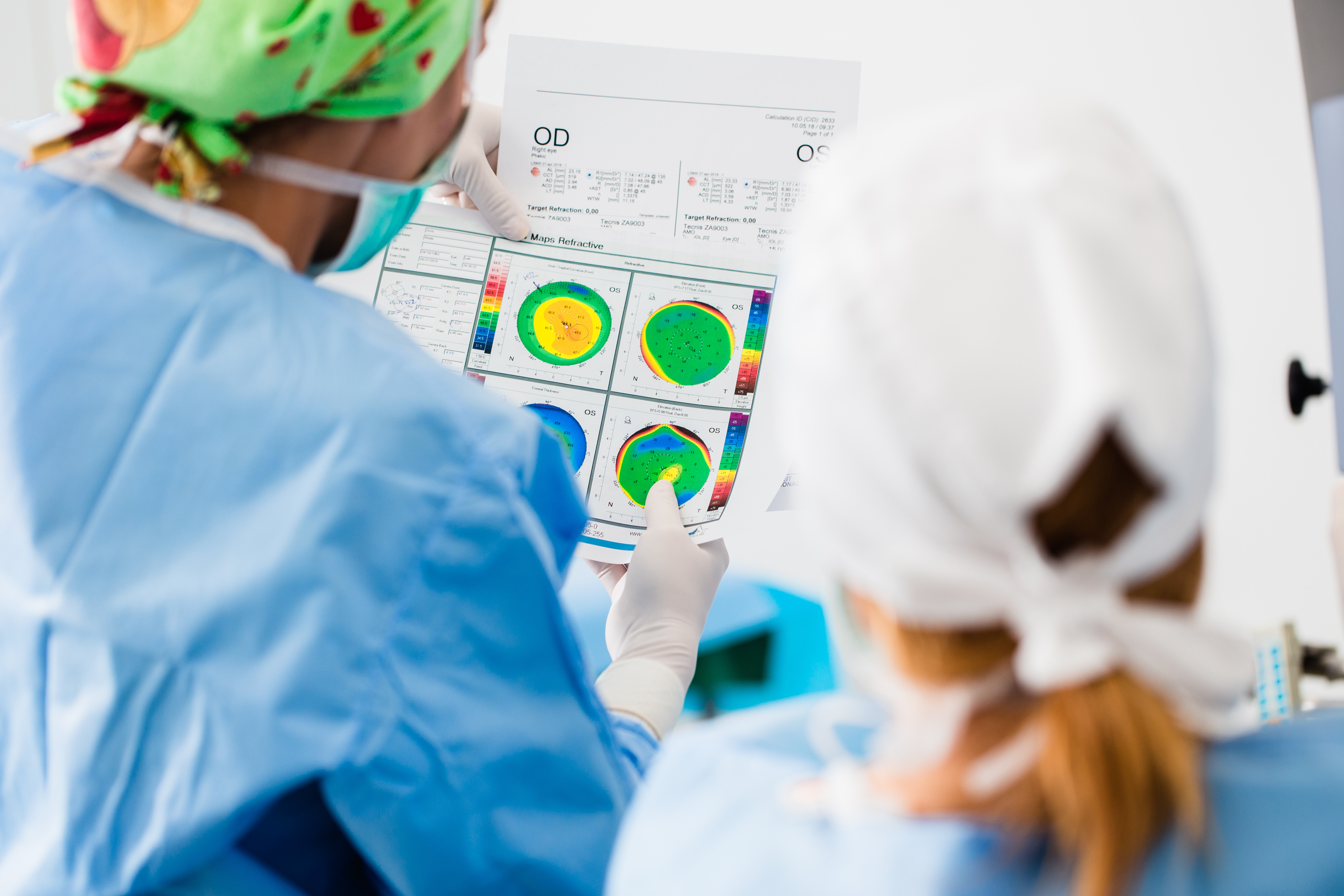 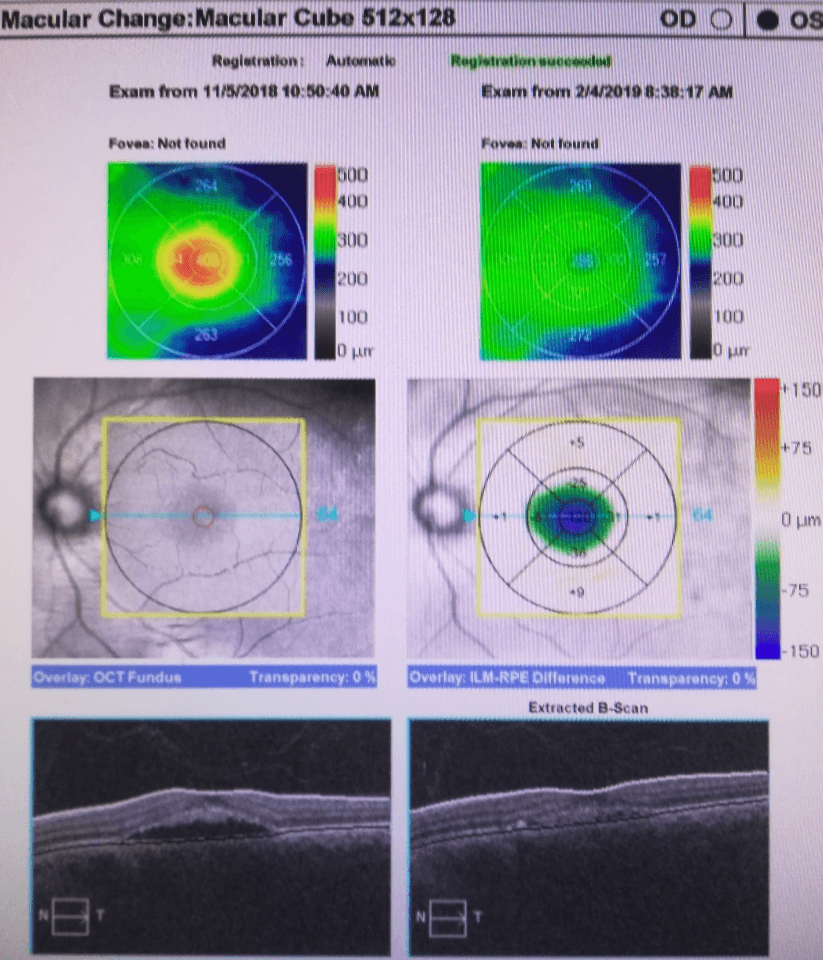